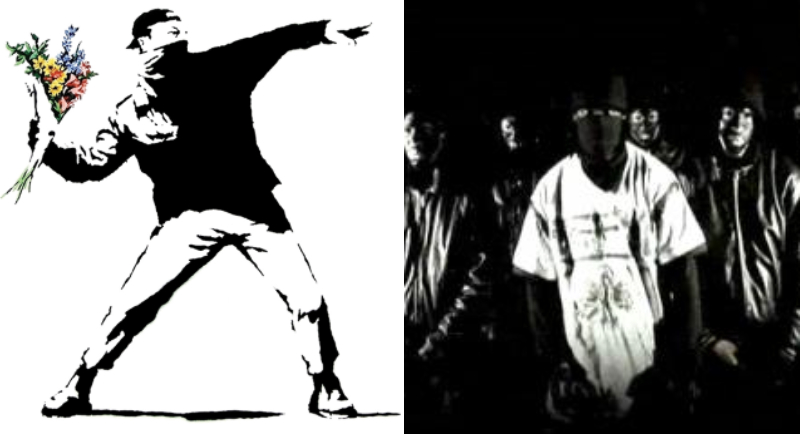 What Do Banksy & Sefyu Have in Common?
6 Things You Didn't Expect!

After a break of almost 8 years the legendary artist Sefyu made his comeback with the release of his latest album Yusef.  You can buy it here.
His first three albums put him on the map in Europe and he was the first or one of the first urban artists to win a Victoire de la Musique (French Grammy). 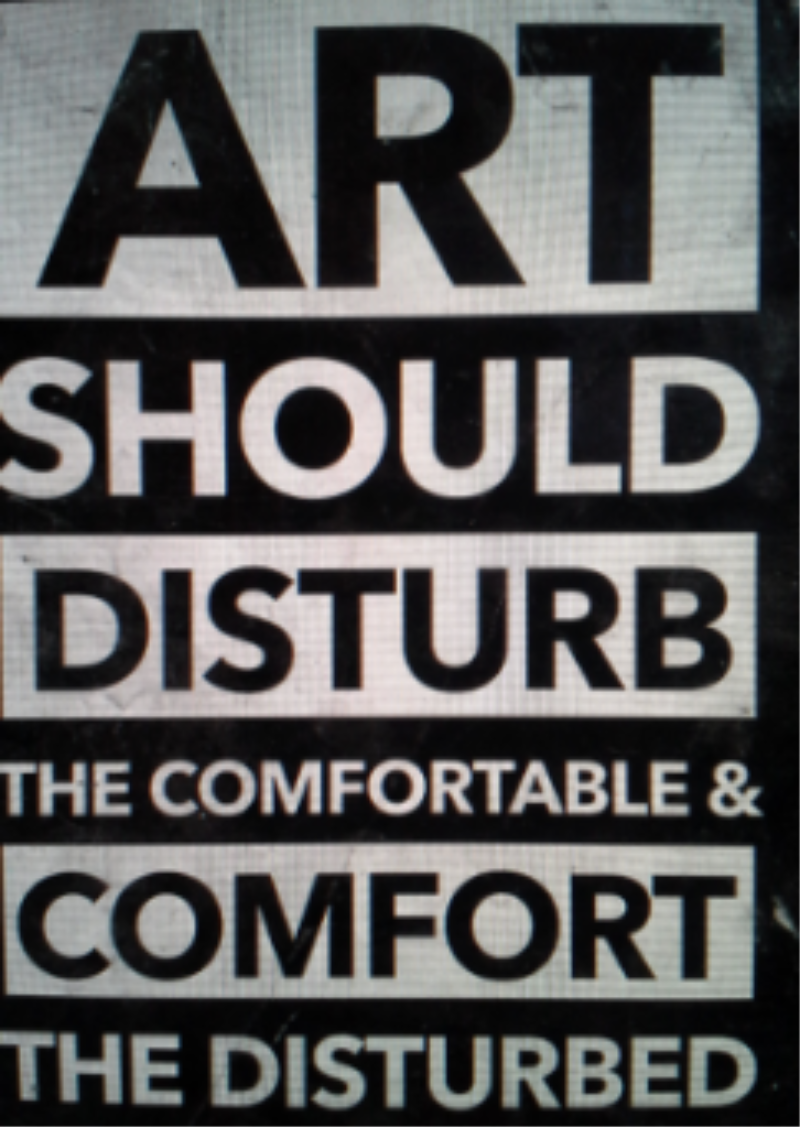 Sefyu was one of the first artists that made me stop, pause and listen to his lyrics (back then you couldn't google them lol). The essence of his music is a mix of journalism, documentary, philosophy, education, combativeness, cultural pride & unity. He was also one of the first artists I heard denouncing the hypocrisy of racism in France stating that when you win a medal you're a patriot and when you commit a crime your origin seem very relevant to the facts.

All of these facts combined made me dig deeper in his story and it's as colorful as his music, culture and persona.
- Sefyu was a football player and played at Arsenal before he got injured and had to renounce his carreer in football.
- Sefyu is a social mobilizer in less favored neighborhoods in Paris and started rapping because he wanted to reach more young people with his words of encouragement and inspiration.
- Sefyu is of Senegalese descent and represent both his culture of origin and his neighborhood Aulnay-Sous-Bois in his art.
- His teacher side can be spotted in the lyrics of "Un point c'est tout" where he urges sons to respect their mothers, "Vis ma vie" talking about social and economical differences, "L'insécurité" where he highlights that banlieus (ghettos) have an economical benefit and therefore are maintained. And in his last two tracks 'Mal(à)laise' & 'Dans La Glace' both songs he also mentions the importance of school to young people in his lyrics.

BANKSY
Banksy's art features a man wearing traditional riot gear with a bandana hiding his face and a cap on back-to-front. He's about to throw a Molotov cocktail but instead of a weapon we see him holding a bunch of flowers (which is the only part in color). By substituting the weapon with flowers, Banksy is advocating peace instead of peace and placed his message of peace in a high conflict area on the side of a garage in Jerusalem. Banksy uses his art to share messages of social importance.

SEFYU
One of Sefyu's nicknames is Senegalo Ruskov inspired by the molotov cocktail just like Banksy's work. Sefyu's lyrics can be perceived like bombs aka molotov cocktails to some because many's perceptions are tainted with prejudice (and racism) but in reality his art is education wrapped up in firy lyrics aimed to destroy rusty prejudices and celebrate the multicultural identity of many youths in the banlieus. 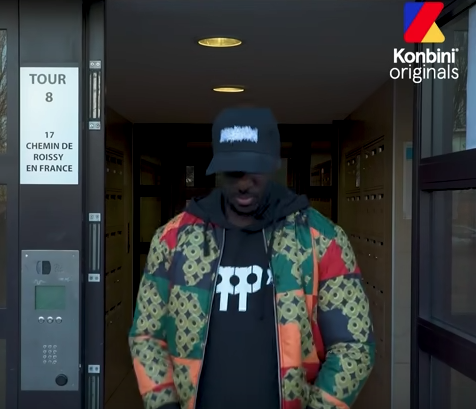 BANKSY VS SEFYU
Nobody knows what Banksy looks like because he never revealed his identity. Just like Sefyu is the most known unknown rapper. Sefyu's signature look is a cap and bandana (just like Banksy's Rage, The Flower Thrower) and he decided to hide his appearance because the focus needed to be on his music & art. 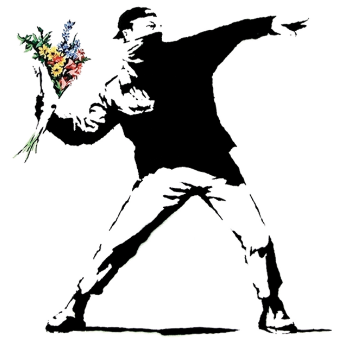 BANKSY VS SEFYU
If you compare the Rage, the flower thrower and Sefyu's signature style you'll see that both are the same! 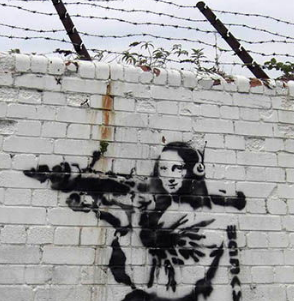 SEFYU
Sefyu uses his art to talk about much needed issues. He isn't afraid to confront society's mainstream thoughts to create a voice for others who are unheard and are renedered invisible. A beautiful example of this is his 'En Noir et Blanc' where he teamed up with World Cup '98 champion Lilian Thuram. In the video they talk about how society has trained us to see each other as black, white, brown yellow and asks us to reconsider and see everyone as a humans trying to live together to create a better world.

BANKSY
Banksy puts social and political issues in our face. These pieces force us to stop and think—something that we often avoid doing in our day-to-day lives. Take Mona Lisa Bazooka as an example. By blending Da Vinci's Mona Lisa graceful and passive appearance with a bazooka, Banksy gives her a powerful, confrontational, and active sensibility. Her calm look next to the powerful weapon reads as slightly menacing changing the whole context of how we've come to know Mona Lisa. It can also be seen as a statement on how complacent people have become to the ongoing realities of war, always taking place somewhere far removed from their own tranquil lives. Just like how some French people on the rive gauche (left side of River in Paris aka the rich side) try to pretend and remove themselves from the rive droite (right side of the River in Paris aka the perceived poor side) 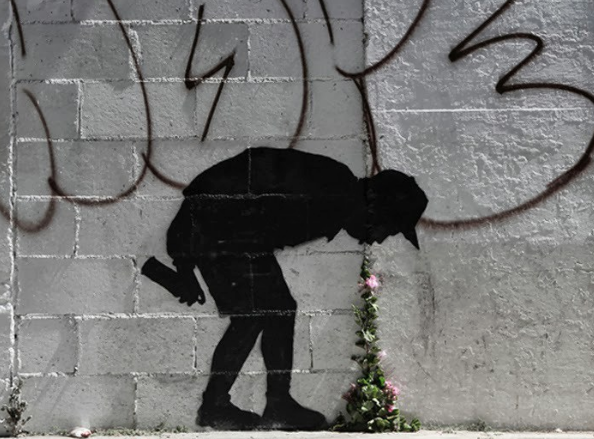 BANKSY
In this New York piece shows self-expression with a graffiti artist puking flowers. The caption linked to this piece is “better out than in,” meaning that if you have something to express, it’s better to let it out rather than hold it in. We can't hold it in if we need to puke so why hold in our emotional needs, like our need to express and create? Find a creative outlet for your physical and emotional needs otherwise you'll be left with a sour stomach.

SEFYU
Sefyu's music balances journalism, education with firy lyrics expressing who he is and what he stands for in his art. When I'm not listening to the lyrics I get fired up by his energizing beats like 'Turbo' which is my personal 'Eye of the Tiger'. His firy song Molotov 4 is also Bob Sinclar's favorite when he's working out

6. Artists Not Appreciated in Their Time?

SEFYU VS BANKSY
"Moi, j'suis Harry Potter dans le corps de Hulk" (I'm Harry Potter in Hulk's body)
Although Sefyu has known great success with his last three albums of which one also earned him a Victoire de La Musique, he also has been heavily criticized. People who grow in the banlieu still have to face a lot of criticism and racism before piercing through to the mainstream. Just like a lot of graffiti artists such as Banksy who were first perceived as vandalists and now are artists in the top 10 of most sold art in Christie's along with Basquiat who also was a graffiti artist

Is Graffiti Art or Vandalism? Is Rap Art or Vandalism?
Just like beauty is in the eye of the beholder, art doesn't resonate with everyone and not everybody is supposed to like it. But before you judge a book by its cover or someone because of the way they look, dress or talk, digg a little deeper and try to find the 'why' behind their actions and art. You might not relate to the end result but maybe you'll find a common ground that will turn to be the starting point of a new adventure and lessons to learn.

Jean-Paul Gaultier & Sefyu? Why Not!

"That was stirring in many ways. How you meld fashion, creativity, history, family, humanity - brilliant! Keep shining!﻿"

My creative mind travels around the world matching up things that might seem opposite to others but are beautiful to me. In the video above I created a cultural patchwork mixing Jean-Paul Gaultier & Sefyu. Although they might seem opposite at first both have used their platforms and art to shine a light on minorities and give them opportunities. Sefyu by expressing his cultures and talking about much needed topics. JPG grew up knowing what it's like to be discriminated for being gay so he always used his runway to highlights beauties of all colors, sizes and ages.

JPG's Marine theme in my eyes can be a beautiful testament to France's rich diversity and immigration. France is a goldmine of cultures yet often they are more hated than celebrated. Yet in Jean-Paul Gaultier's work I see his love for other cultures, his head office is located right next to the african quarter in Paris and the african mamas in Barbes also served as an inspiration for his early work.

When you keep an open mind, magic can happen everywhere and with everyone.

Zürich Capsule Wardrobe | What To Pack for Zürich
August 04, 2021